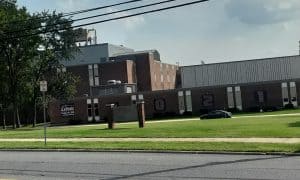 Baltimore County Fire crews were called to Perry Hall High School for a reported odor of gas in a classroom on Wednesday before 10 a.m. The school was evacuated.

Units on the scene investigated the school. No injuries were reported.

The White Marsh Volunteer Fire Company reported any hazards have been mitigated. School maintenance is on scene to address the issue.

I am calling to inform you of an incident that occurred today at Perry Hall High School. At about 10:07 a.m. we noticed a gas smell in the building. The building was evacuated, and the Baltimore County Fire Department (BCFD) was dispatched. The BCFD gave all clear to return to the building at approximately 11:10 a.m. Out of an abundance of caution the boiler was turned off. In addition to the gas smell, we also had a pipe burst in the building that has affected several classrooms. Students and staff in those rooms have been relocated to another part of the building. Classroom instruction is proceeding as scheduled.

I want to thank our students for their cooperation and for quickly exiting the building and adjusting to the circumstances. This experience emphasized the importance of completing our drills on a regular basis for the safety of everyone.